Chicken Coq au Vin is a chicken stew, that is braised in red or white wine, from France. The recipe has origins in France, when King Henry IV promised the people a chicken in every pot. The recipe has onions, mushrooms, bacon, pork fat, chicken, carrots, onion, wine, and spices. It is a dish that can be made into a complete meal, with ingredients gathered at home.

Although, some believe it to be a pheasant dish many chefs believe it is a dish that was made for guests quickly, with available ingredients It is a middle class comfort food dish.

The exact origin of the recipe is unknown. A cookbook called “Cookery For English Households” had a chicken recipe using white wine called poulet au vin blanc. A chef in 1907, named Ali-Bab, had a recipe in a cookbook for Coq au Vin similar to the modern recipe used today. 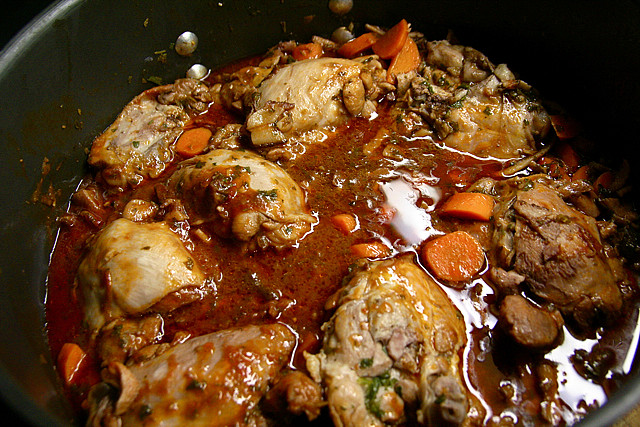 Ali-Bab described Coq au Vin as a ragout stew that was prepared on a hot fire using a young rooster. He called it a chicken stew with wine. The recipe was popularized by chef Julia Child known for French cooking. The recipe was in one of her cookbooks and she made the recipe on her cooking show on TV. This brought French cooking and the recipe into the homes of many people.

Some cooks marinate the chicken in wine overnight to infuse it with flavor. It is believed to be a Burgundian dish and the best wine to use is red Burgundy. The recipe uses pork fat or bacon to cook the chicken and other ingredients. The pork fat is cut into lardoons, which are large cubes, used to cook the chicken or meat. This adds incredible flavor to the chicken.

Buy an organic or hormone free chicken and have the butcher cut the chicken into pieces at the meat market or grocery store. This saves time on preparation.

This recipe marinates the chicken overnight to produce a flavorful dish.

In a large dutch oven, preheat the oven to about 350 degrees. Add the olive oil and cut bacon or pork fat into square pieces. Let it cook about 10 minutes in the pot. It should be brown. Remove to a plate with a slotted spoon.

Take the chicken parts from the refrigerator and brown in batches in the oven about 10 minutes or less. Keep chicken parts in a single layer and put on plate with the bacon or pork fat when browned.

Put the chicken and bacon back into the dutch oven, add the chicken stock and the rest of the wine from the bottle. Add the springs of thyme. Cover the pot in the oven and cook 40 minutes to one hour until the chicken is done.

If you need to thicken the sauce, add 1 tablespoon butter and flour. Serve with hot buttered noodles. It serves 6 people.